Garcinia Cambogia extract is also known as the Malabar Tamarind and has been used as a traditional remedy in Asian countries for many years to treat a number of conditions ranging from arthritis to infections. The reason most people reading this have heard of Garcinia Cambogia Extract however, is due to the media hype created following generally unfounded claims of its miraculous weight loss properties. Due to the fact it became popular after this, many authorities became concerned about potential side effects of Garcinia Cambogia Extract and questioned how sound the science underlying its use actually was, creating a good deal of controversy. In this article we will review Garcinia Cambogia Extract, its properties, the science underlying its potential uses and its side effects. 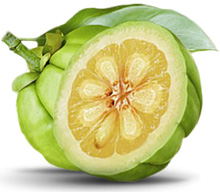 A study in rats suggested that both HCA (Hydroxycitric acid) and HCAL (Hydroxycitric acid lactone analogue) suppressed appetite and also resulted in weight loss in the rats, the degree of which was related to the dose. HCAL was felt to be more effective to this regard. Another study in rats suggested that HCA prevented serotonin reuptake in the brain, similar to the effect of SSRI’s, well-known antidepressants. 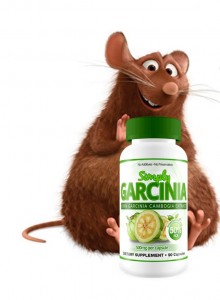 What about humans? In one study of healthy human participants it was suggested that although there was an increased sense of fullness in those taking Garcinia Cambogia Extract there was no difference in energy intake between those who did and who did not take the supplement. In another study however, with almost 90 participants, HCA was found to have no significant effect on fullness or appetite.

Conclusion: Studies in animals suggested that Garcinia Cambogia Extract may suppress hunger, however in humans the studies are relatively few and have conflicting results. 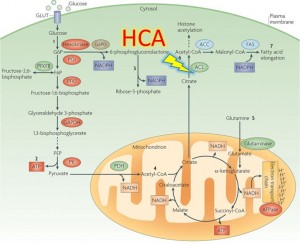 I’m going to be talking a lot about HCA, which as mentioned above is basically Garcinia Cambodia Extract. Studies done in rats in the 1970’s suggested that HCA had some effect in blocking fat synthesis. To get a little technical, the suggested mechanism of this is by blocking the first step in fatty acid synthesis, which is the conversion of citrate to acetyl-CoA.

One study looked at 24 overweight men and women, looked at 14 days of administration of HCA. The effects were compared to the effect of tomato juice. It was found that taking the HCA led to a decrease in energy consumption and there was a trend (not statistically significant) towards small decrease in bodyweight. The study design appeared decent, but the main limitation was the small number of patients.

Another study looked at the effect of HCA administration, for 5 days, in untrained women. Several different exercise and metabolic variables were studied. It was suggested that the HCA resulted in improved exercise performance and increased metabolism of fat. A different study looked at the effects of 3 days of HCA administration on overfeeding in 10 lean male subjects. The findings suggested that lipogenesis (basically production of fat) might be reduced.

Some of the studies reported above suggested that Garcinia Cambogia extract may have a beneficial effect as an anti-obesity treatment. This has not been the case in all studies however. In one study Garcinia Cambogia extract did not have a beneficial effect on fat metabolism in endurance-trained humans. Another study that looked at 10 weeks of Garcinia Cambogia supplementation in humans suggested no benefit in terms of weight loss, fat burning or cholesterol profile. This has been seen in other studies in humans also. The same goes for the effect of Garcinia Cambogia extract on exercise metabolism in humans, where contrary to the above-mentioned studies, other studies have shown no benefit in terms of exercise efficiency. In this section I haven’t exhausted all the studies performed, rather just tried to provide a selection from decent reputable sources and a balanced view.

Conclusion: Some studies in humans have suggested that Garcinia Cambogia extract may have some utility as an anti-obesity treatment with beneficial affects on fat metabolism. Other similarly designed studies have found no such effect. It’s difficult to draw conclusions given limitation such as study size and duration. It’s important to note that even in the case of the positive studies, due to the nature of the studies, the findings should be considered hypothesis generating rather than conclusive in any way. That is, larger, well-designed trials are required before we can attempt to draw conclusions of clinical benefit.

A number of studies have been performed that suggest that in addition to the proposed effects on weight loss that the Garcinia Cambogia extract may have a number of other beneficial effects. Studies have looked at potential anti-diabetic effect, effects on blood cholesterol, anti-oxidant effects, antimicrobial effects, and anti-cancer effects. It’s important to note that pretty much all these studies have been done in either rats, or on cells in test tubes.

Conclusion: Although there may be some preliminary basic science research looking at potential non-obesity related health benefits of the Garcinia Cambogia extract, as of yet there are no good reported clinical studies to this effect and so it’s important not to assume any clinical benefit whatsoever. Initial pilot studies, then well-designed trials in humans are required.

In rats, doses of Garcinia Cambogia extract of up to 1244mg/kg per day, showed significant toxic effects on the testicles, whereas 389mg/kg per day did not show these effects. One study studied the effect of Garcinia Cambogia extract (containing up to 1000mg HCA per day) on sex hormone levels in humans. No significant adverse effects were found. An 8 week study looking at the predominantly HCA containing ‘Super-Citrimax’ in 60 volunteers suggested that doses up to 4667mg/day were safe.

There have been some high profile reports of suspected toxicity in humans. In one of these cases a 35 year old woman, who was taking the antidepressant escitalopram who then started taking the Garcinia Cambogia extract and developed the dangerous ‘serotonin syndrome.’ She had been stable for a while on the medication prior to starting the Garcinia Cambogia extract. In this case it was difficult to know what to attribute the symptoms to and there was no proof that the extract itself was the causative factor. Regardless a potential drug interaction needs to be considered. 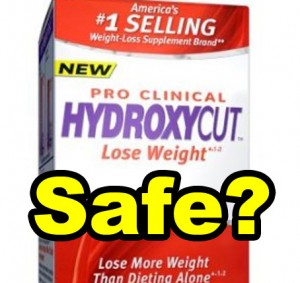 One of the major concerns is a potential relationship between Garcinia Cambogia extract and liver toxicity. This has been highlighted through the former HCA containing supplement ‘Hydroxycut’ potentially being implicated in multiple cases of liver toxicity. Hydroxycut was reformulated in 2009, and thereafter did not contain HCA, nor did it contain ephedra. Hydroxycut contained a number of ingredients however and without specific testing it is difficult to definitively implicate HCA alone. Regardless, authorities continue to exercise caution with regard to the use of Garcinia Cambogia and potential adverse effect such as liver toxicity.

Conclusion: Although not definitively proven, there is a potential risk of adverse events associated with taking Garcinia Cambogia extract, perhaps the most highlighted of which is liver toxicity. Appropriate caution should be exercised for potential users who should at least be aware of these. Regulation by regulatory authorities and appropriate surveillance for side effects is the best way to gather more informative critical data.

Garcinia Cambogia – What to make of it?

There is a considerable body of science in the published literature about the potential health effects of Garcinia Cambogia extract / HCA. In terms of actual human clinical data, the majority looks at the effect of Garcinia Cambogia extract on obesity related outcomes. Some studies suggest a benefit and others don’t. Most the studies are relatively small and it’s not possible to draw definitive conclusions.

With regards to the non-obesity effects, the vast majority of the studies are pre-clinical, so either on cells in test tubes or in rodent models. Many of these pre-clinical studies suggest a potential health benefit, however these have not generally been examined in clinical studies. This makes most of the science underlying these claims what we call hypothesis generating. This is important as this should be built upon to design appropriate clinical studies examining whether these hypothesis actually translate in to clinical benefits. What’s very important is not to make far-reaching claims or promises based upon these findings as for all we know not only will they not translate in to clinical benefit, but possible harm.

In general the clinical studies performed in humans, although over a relatively short time period don’t suggest any obvious toxicities however there are case reports that have surfaced suggesting a possible role of the extract in side effects such as liver failure. The reports are not conclusive with regards to implicating the extract. It’s important to maintain caution however, and be aware of the potential for side effects.

Claims of spectacular beneficial health effects of Garcinia Cambogia extract are unfounded based upon the current scientific literature. There may be a role for the extract in weight loss or other outcomes, however given conflicting results further large well-designed trials would be the only way to substantiate the claims further and allow it to be recommended based upon evidence. It’s also important that there is some regulation regarding supplement distribution that included and systematic collection of data that would allow characterization of its side effect profile given the potential for dangerous toxicity.