What is a Holter Monitor?

A Holter monitor is a battery operated wearable monitor that continuously records the electrical heart tracings (known as EKG’s) over 24-48 hours. The Holter monitor can be worn throughout normal daily activities. The Holter monitor test is useful in picking up heart rhythm problems. In medical terms we call Holter monitoring a form of ambulatory electrocardiographic monitoring. Modern Holter monitors are small and easily wearable. Usually there will be 2-3 leads attached to the chest wall by stickers. After the wearing period is over your cardiologist reviews the tracings.

When is Holter Monitoring Used?

The most common reason is palpitations. This would include sensations of skipped and extra heartbeats such as PVC’s. Another common reason is syncope, which basically means passing out. Other reasons may include monitoring heart rate to see if it is too fast (such as afib with rvr) or too slow, or to see if ongoing treatments for heart rate are effective.

Some people may have conditions such as heart block that can lead to a slow heart rate, dizziness and passing out. Some people may have uncontrolled fast heart rates from atrial fibrillation or other forms of arrhythmia. Holter monitors can be used to diagnose and characterize these disorders.

How is the Holter Monitor Put On and Worn?

A technician who will provide you with the instructions needed and will attach the Holter monitor. Firstly the leads are placed on the chest wall, attached by stickers. In some instances, for men, hair may need to be shaved off the chest to allow good electrode contact. The Holter monitor is typically carried in a pouch and worn across the shoulders. 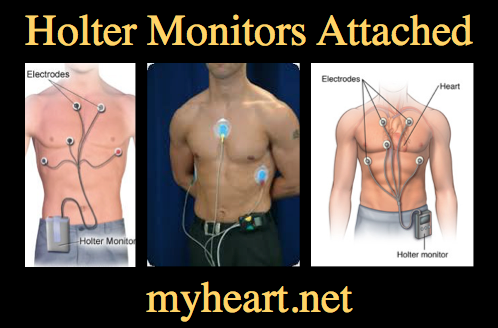 Precautions to Take While Wearing the Holter Monitor

In general patients can go about their usual day-to-day activity. Of course those wearing the monitors cannon swim or shower. It is also advised to stay away from metal detectors or large magnets.

No, they are not dangerous. There is a very small chance of skin irritation at the site that the electrodes are attached to the skin. Wearing the monitor may be inconvenient since there are leads attached and it is worn continuously, but it is not dangerous.

One of the most critical parts of the Holter monitor test is the patient diary. Patients are asked to keep a diary recording the timing and type of symptoms they have. These are then correlated with the tracings to see if symptoms and tracing abnormalities are related. One of the biggest issues with Holter monitoring is that patients often don’t keep an accurate diary that strongly limits interpretation of the monitor.

The Holter monitor will show the average heart rate, the fastest and the slowest heart rate. It will detect pauses and their length. It will catch fast heart rhythms and can often help to characterize them. Importantly the reading cardiologist will go through the patient diary and see if any heart tracing abnormalities were seen at the time symptoms were recorded

Do Holter Monitors Catch Everything?

Of course the monitor can only catch something if it occurs during the period that it was worn within. For that reason, Holter monitors are typically best for those patients that have symptoms almost everyday. If symptoms are less frequent then the Holter monitor may not be as useful. Often however they are still used as the initial evaluation.

What If the Holter Monitor Doesn’t Catch the Problem?

The Holter monitor can only detect issues that occur during the monitoring period. Often people will use the Holter monitor initially as it makes more sense from a technical and cost perspective. If the symptoms are less frequent, a longer-term monitor is the next step. Some Holter type monitors can be worn for up to 14 days. If long term monitoring is desired then there are non-wired monitors that can be carried around and placed on the skin when symptoms occur. That is not continuous though and only record when the monitor is placed on the chest. More recently there has been increasing use of monitors placed under the skin that can record continuously for up to 2 years. The Holter monitor is often the initial step, but there are many options available.