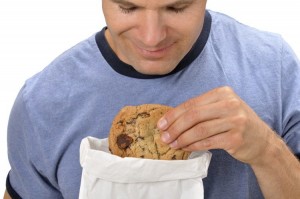 How To Beat Cravings

Cravings are probably the biggest reason why diets fail, so it prudent we should spend some time discussing them.  I am actually writing this piece because I myself just spent the past hour battling a craving for chocolate.  It goes without saying that I beat it and settled for some fruit and I want to share with you the techniques available for fighting them off so your diet too can be a success.  It is vitally important that you know how to beat cravings if you want to succeed with weight loss.

The first thing you should realize is that cravings affect everyone, yes everyone.  You should not feel weak if you suffer them on a daily basis or constantly falter and give in to them.  They are incredibly powerful and have the ability to make you believe that you actually need the snack or treat.  Luckily, as with most things, once you understand the mechanism behind them you can develop ways to combat them and stop the resultant disappointment to which they inevitably lead.

The human body is designed to survive.  For many years the human race has had to survive in a variety of harsh environments where food may not have been plentiful.  One of the ways it managed to do this was by ensuring that when there was food available it was consumed and stored so it could be used in harder times.  This was achieved through the development of a complex neuro-hormonal system.  As a result when we see food we trigger mechanisms that tell us to eat it so that we can keep our stores of energy topped up.  As we discussed previously the most dense energy source is fat which is highly desirable for this reason, and as a result often stimulates strong cravings.

In the past this didn’t result in a problem as everything balanced out.  Sometimes we would eat and put on weight and other times we would starve and lose it again.  The problem in these modern times is that food has become too readily available for this system to work.  The endless availability of the energy dense foods that now surround us has happened over such a short period that our bodies have been unable to adapt.  We have not yet learnt that the period of starvation is not coming and still feel that in order to survive we must eat the food available to us.  This can result in constant weight gain over the years as we continue to wait for the famine that isn’t coming.  If you want to learn how to beat cravings you need to manipulate this mechanism.

As I mentioned this is all controlled by neuro-hormonal mechanisms.  You may have heard of the hormone leptin, released from the fat stores in our body, which is responsible for our feeling of satiety (feeling full).  Well there is another hormone that does quite the opposite and it’s called grehlin.  This hormone is released from the stomach and causes us to feel hungry.  Naturally it is most active before we eat, so when we are dieting and eating less it becomes more of a problem, as it doesn’t quite turn off, leaving us more prone to hunger and cravings.

A similar thing happens when we put calorific foods in our mouths.  The taste buds detect these foods and send instant signals to the brain that make us feel happy.  This however is a purposefully short-lived sensation and soon after we swallow we feel the need to taste more.  This can result in us filling up on copious amounts of a food as before the stomach has realized that it is full (this feeling can take tens of minutes) we have consumed more than we initially intended.  Have you ever sat down to a meal and kept eating until you felt full, only to find later you felt like you’d eaten too much?

This is the mechanism responsible.  There was a time when this was advantageous as it allowed us to eat lots of a calorific food when we came across it in nature (which may have been several days apart), but now it just results in us overeating on a daily basis.

The point I want to make is that these neuro-hormonal systems have developed over tens of thousands of years and are here to stay.  We have rapidly altered the environment around us without allowing the body time to catch up and until someone develops a drug that can fundamentally alter the way we function, we must do what we do best and find ways to adapt.

So what can you do to help reduce cravings or deal with them when they do strike?

So from now on take steps to stop cravings taking a hold and when they do strike, don’t react impulsively but instead take time to understand why you are feeling them and take steps to beat them.  Importantly if you do give in, don’t be disheartened but instead learn from the experience, try again, and you’ll get the hang of it eventually.

So now you know how to beat cravings!