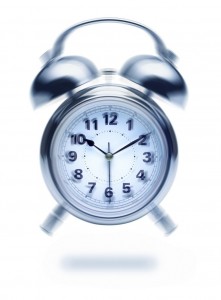 There are very few conditions that have drawn as much controversy and as much frustration for patients and physicians over the years as mitral valve prolapse. On one hand, if anyone with MVP asks a physician what the significance of their mitral valve prolapse is, they will inevitably be greeted with the response, “It’s normal, you shouldn’t think twice about it; in fact your symptoms have nothing to do with it, so forget you have it!” On the other hand however, most people that have an interest the condition have no doubt read or heard about reports of devastating complications that may be associated with MVP, including dangerous heart rhythms, infection in the heart, need for emergency heart surgery, and even dying suddenly. Many patients are literally convinced they are going to die on a daily basis, whereas most patients with MVP don’t even know they have it! It is these contradictions and inconsistencies that have led to a great deal of confusion for patients, physicians and those reporting on the subject. This is made apparent by the fitting titles of pieces of work in major medical journals as seen in the table below. 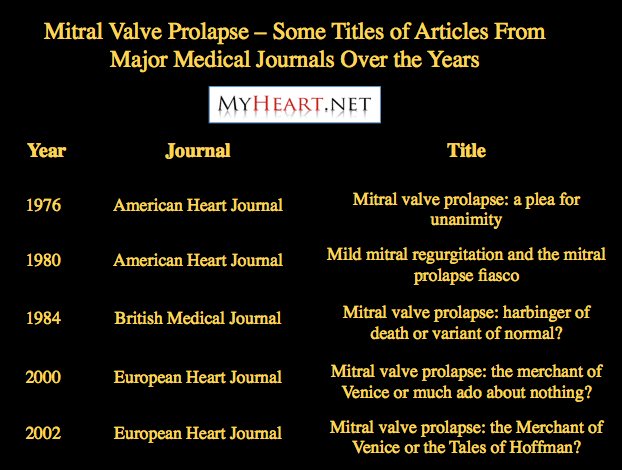 MVP – Incorrect Diagnosis and an Era of Confusion

I have touched on this in the previous post. There are many reasons for this confusion; I’ll try to explain some of them. As mentioned in the previous article, there was a time when the imaging techniques for the heart were not refined and literally everyone getting an echocardiogram was labeled with MVP. The problem was made worse by the fact that those people referred for the echocardiograms were of course those with symptoms (for all we know if we had done echocardiograms on people without symptoms they would have been just as likely to been told they had MVP!).  This unfortunately led to a great deal of bias, over-diagnosis, and the unfortunate consequence of multiple symptoms and findings being associated with MVP. By the time we had developed important concepts and come up with the correct criteria for MVP it was too late as we had decades of research that has associated the incorrect old version of MVP with a large spectrum of incorrect symptoms and findings.

When the new diagnosis of MVP was applied to patients with many of the same symptoms and findings as associated with the old MVP, it was in fact realized that most of the patients did not in fact have MVP, and therefore a lot of physicians became dismissive of MVP altogether. Unfortunately many patients had been diagnosed with MVP in the past, and due to what they had been told could not accept that MVP was unlikely to be related to the majority of their symptoms. Later many realized they in fact had a condition known as dysautonomia.

MVP – Getting to Where We Need to Be

Since we developed the correct criteria for diagnosis of MVP, there has been much research conducted to determine true associated complications of the disease.

Mitral valve prolapse it turns out has different forms and shapes. First and foremost is the true diagnosis of MVP, whereby there is clear prolapse of the valve in to the top chamber of the heart. Of the people with mitral valve prolapse there are those with simple prolapse and there are those with thickened and severely prolapsing valves. Whereas those with simple prolapse likely have no greater risk then the general population and can probably be considered a variant of normal to some degree, those with more complex prolapse do have some associated risks that include the need to have to undergo surgery to correct a severely leaky valve. As we will discuss in the next post, the key is to identify those people at high risk for complications, try to prevent those complications, and in those people with a leaky valve, to follow them closely to make sure that if they ever need surgery, it is done in a timely manner.

Mitral Valve Prolapse 5 – From Fiasco to Sensibility; How Common is it