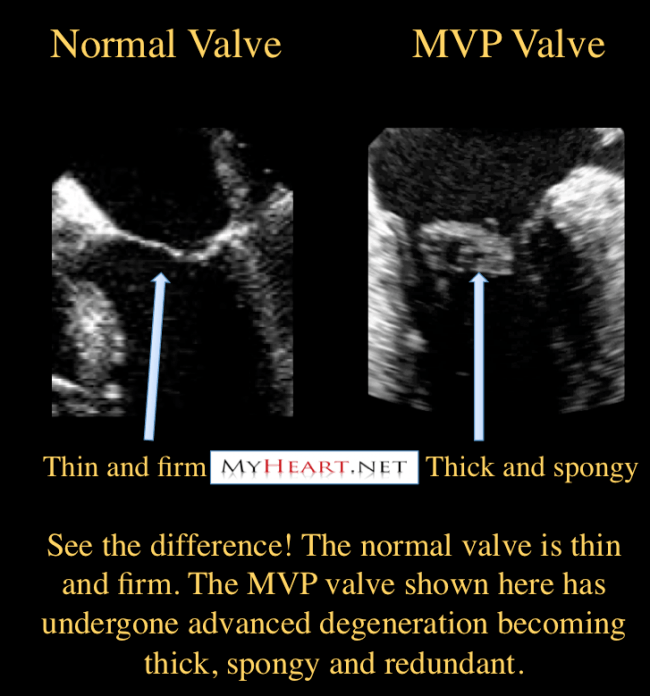 Is it the whole valve that is affected?

The whole valve is generally affected, however usually certain areas of the valve are affected worse than others. The mitral valve has 2 leaflets (the front (anterior) leaflet and the back (posterior) leaflet) and to complicate if further we generally split each leaflet in to 3 parts. This makes 6 parts in total, anterior 1,2 and 3, and posterior 1,2 and 3. When analyzing a valve in detail I like to look at which of the six parts are affected, it’s important to do this because it can affect management.

For example, look at the image below which uses advanced 3D-techniques to look the valve closely, in this case viewing the valve from above. Just stick with me for this one, it will be just a little technical! In the normal valve there are no clear prolapsing segments. In the MVP valve shown here, there are 2 clear prolapsing segments seen here. The prolapsing segments are in the left (technically called segment 1) and right (technically called segment 3) parts of the front (anterior) leaflet. So in this case the correct terminology is Anterior1 and Anterior3 prolapse (A1/A3 prolapse). You could also argue in this case that the posterior leaflet as a whole appears to be prolapsing a little. 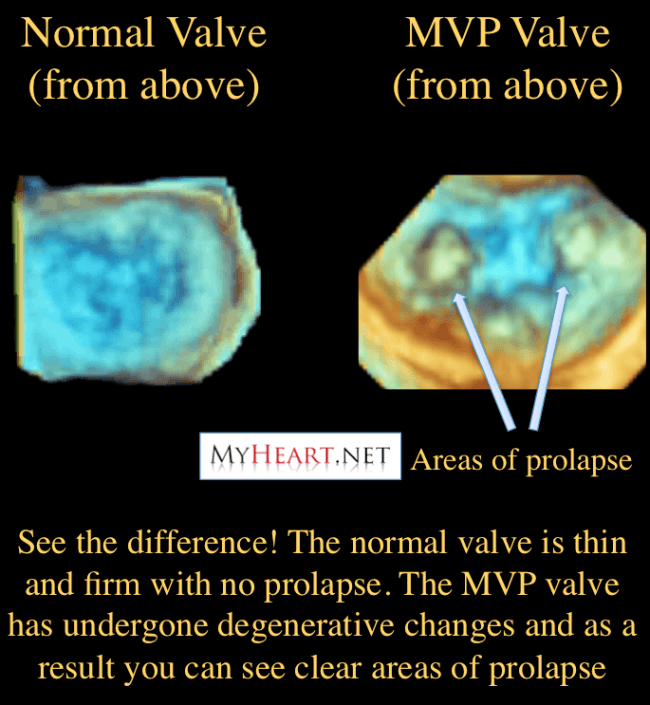 What exactly causes the valve to become like this?

So far we have described what the valve looks like as a result of the process of ‘myxomatous degeneration’ but what exactly is happening in this process and how do we cure it? Unfortunately we don’t have the definitive answer yet but we are certainly working on it. Some studies performed by various groups over the years have given us a pretty good insight in to what’s going on. I’ll explain some of it without getting too technical.

The valve is mainly made up of connective tissue; similar to a joint that holds bones together. Just like a joint of some one that is double-jointed, the valve in MVP can be considered over-stretched when force is applied and therefore it prolapses when the heart squeezes and force is applied. Collagen is a main component of connective tissues. Normal mitral valves generally contain type-I collagen (such as that found in tendons that hold muscles to bones), however in mitral valve prolapse there is a shift towards type-III collagen, which is found in weaker more extensible tissues and known to have less strength. Another important observation in MVP valves infiltration of the valve by substances called ‘proteoglycans’ that disrupt the normal support of the leaflet.

Studies have also shown that valve tissue in MVP valves is more extensible and only half as strong as normal valve tissue. Also, the chords that attach the MVP valves to the heart wall fail at loads one ½ of those of normal, which may help to explain why rupture of those chords is a main cause of worsening of valve failure and thus often an indication for needing surgery.

A few studies have tried to look in to whether there is a genetic cause of MVP, and although there is a suggestion that a certain proportion of individuals have a hereditary component, much further work is needed to identify potential genetic causes. If you have MVP, you can’t blame your mother and father just yet!

We’ll discuss other aspects of MVP in further posts.