Home / Heart Health / Risk & Prevention / Prediabetes – What is it and Who is at Risk?

Diabetes is one of the most significant chronic medical diseases that currently afflicts the population.  Diabetes should not in fact be seen as a disease in itself but rather as a causation of several other debilitating diseases.  Unlike, for example, chronic pulmonary disease which mainly effects one organ system (the lungs), diabetes causes coronary artery disease, chronic kidney disease, retinopathy (loss of vision), peripheral vascular disease, stroke and many more.

Diabetes should be taken extremely seriously!  Once you develop diabetes there is very little you can do as it is largely irreversible.  You will spend the rest of your life playing catch up trying to control your sugars to limit the damage caused (however good your control, damage will still be occurring).  Luckily however there is a period before the development of diabetes (known as pre-diabetes), and if realized in time the progression can be reversed or greatly prolonged.

Pre-diabetes can span a period of several years and is asymptomatic (meaning there are no symptoms!).  People who seemingly think they are healthy can be harbouring the disease and damage can be occurring without them even knowing it.  Over a period of years this damage can be quite significant, even before progression to diabetes has occurred. 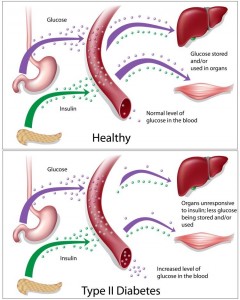 An explanation of how prediabetes forms in the human body.

What is Happening In the Body During Prediabetes?

The main problem is with the hormone insulin.  This hormone is produced by the pancreas and is responsible for several metabolic processes and is vital in carbohydrate, fat and protein metabolism.  Insulin is very important in removing glucose (sugar) from the bloodstream and packing it away into the muscles and liver for storage.

In Pre-diabetes the tissues become increasingly resistant to the effects of insulin and as a result become less effective at packing away the sugar.  The pancreas can produce more insulin but the tissues become more and more resistant until the body can no longer compensate.  As a result the blood sugar levels elevate and the damage to the body begins.  This is not the only mechanism by which insulin resistance causes damage but is an extremely important one.

The more of these you suffer from, the higher your risk.  Contrary to popular belief however, you do not need to be overweight to develop diabetes.  Being overweight significantly increases the risk, but is by no means necessary in the development of the disease.  Just because you are thin doesn’t mean that you don’t have or can’t develop pre-diabetes.

Pre-diabetes is starting to develop at younger and younger ages, but the risk is significantly higher in those over 35.  It is important for those at risk to be checked early even though they feel completely well.

If you have read my articles on ‘the 35-45 year old health check’ you will know that the way that pre-diabetes is detected is through a blood test.  There are a few different measurements that can be used to make the diagnosis and each one has a different defining range.  Pre-diabetes is a continuum between ‘normal’ and ‘diabetes’.  It is not yet a complete disease and as a result it is hard to define leading to occasional difficulty in its detection.  The following tests and ranges should however detect the majority of those with pre-diabetes.

This is the level of glucose in the blood after a period of fasting.  If you are undergoing this test is is important that you consume nothing but water for the 9 hours preceding the test.  If you don’t adhere to these instructions your blood sugar could be higher than expected leading to an incorrect diagnosis.

The test is very easy to carry out as it simply involves the drawing of a sample of blood.  The results of the blood test should be available to your doctor the following day.  The American Diabetes Association (ADA) classifies the following fasting plasma glucose range as indicative of pre-diabetes.

This is the level of glucose in the blood after an oral load of glucose.  Normally the insulin released would be able to deal with the glucose but when insulin resistance develops the sugar levels may not be reduced to normal levels.

For this test you will be asked to fast as in the fasting glucose test, but this time you will have your blood drawn and then immediately be given a drink of glucose.  After a period of two hours your blood will again be taken and this is the result we are interested in.  The ADA classifies the following glucose range as indicative of pre-diabetes.

HbA1C is a more recent addition to the diagnostic criteria of diabetes and a range has been suggested that is indicative of a high chance of developing diabetes, and thus may be used to diagnose pre-diabetes.  It is a slightly different measurement as those above in that it gives an indication of what the blood sugar levels have been doing over the past few months (more like an average).  For this reason it is very easy to test as the blood can be taken in the non-fasting state.  The following HbA1C range is suggestive of pre-diabetes.

Any of the above tests can be used to diagnose the presence of pre-diabetes.  No one test is necessarily better than another and your Physician will decide if you require more than one.  It is very important however to remember that these tests do not detect all cases of pre-diabetes and if you have risk factors such as obesity, family history, dyslipidemia or hypertension you should still be vigilant and not assume just because your results are ok that you don’t need to take action.

If you are or have been diagnosed with prediabetes don’t panic.  If anything you are lucky as you have caught it early and there are still steps you can take to reverse or at least slow its progression to diabetes.