What Is Rheumatic Heart Disease?

Rheumatic heart disease is when heart valves become damaged due to a “Group A Streptococcal’ throat infection, more commonly known as strep throat. The infection usually occurs during childhood, but the heart damage only becomes apparent many years later. 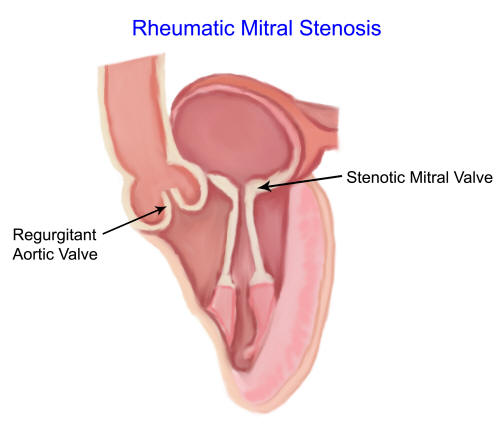 Rheumatic fever usually occurs 3 weeks after the streptococcal throat infection and can affect not only the heart, but the brain, joints and skin. The inside of the heart can get inflamed. Although less common, some patients experience severe valvular disease during this stage known as acute rheumatic carditis. Classic rheumatic heart disease usually occurs years later as a result of repeated attacks to the heart valves.

What Happens In Rheumatic Fever?

The signs and symptoms of rheumatic fever happen about 3 weeks after the initial streptococcal throat infection. There can be a combination of arthritis affecting many joints, involuntary movements known as chorea, a ring like rash known as erythema marginatum, and nodules under the skin. The arthritis usually occurs first, and is present in up to 80% of patients. It is painful and can move from joint to joint. The chorea, which is the involuntary movement disorder typically, happens 1-6 months after the initial infection. This can occur in up to 1/3 of patients.

In addition there is an effect on the heart known as carditis, which is basically inflammation of the heart. This usually happens a few weeks after the infection and can affect the sac around the heart and also the valves. The signs and symptoms include a fast heart rate, a murmur and chest pain.

A heart murmur, caused by the valve disease is heart when listening to the heart. There is usually mitral regurgitation, a leaky mitral valve, however at later stages a tightening of the valve occurs known as mitral stenosis. The mitral valve disorders can often go without symptoms for several years before they present with signs and symptoms of heart failure such as fatigue, shortness of breath, swelling, and irregular heart rhythms such as atrial fibrillation.

The main treatment for rheumatic fever is penicillin. The penicillin is given by injection. Other treatments are often used such as aspirin, steroids or immunoglobulin. These other treatments have not been proven to improve long-term outcomes such as valvular heart disease. Some patients will have severe valve disease in the acute phase of rheumatic fever and may require surgery if medicines cannot stabilize the situation.

Atrial fibrillation (without and with RVR) are treated with blood thinning medication and heart rate control. Heart failure is treated with medicines traditionally used to treat that such as beta-blockers and diuretics. Antibiotic prophylaxis for procedures should be used as determined by a physician. In pregnant patients, it’s important that specialists from both antenatal and cardiology manage cases because if not managed carefully the outcome can be very poor.

When the valvular disease in rheumatic heart disease becomes severe treatment with surgery is typically required. This can be open-heart surgery or minimally invasive treatment through a catheter similar to a MitraClip or TAVR depending on which is most suitable. For leaky mitral valves, surgical repair is preferred over surgical replacement if possible.(If there is also valve tightening this may not be possible. For tight mitral valves, mitral stenosis, minimally invasive catheter treatment has replaced surgical valve replacement as the treatment of choice and has proven to yield good results.