Home / Heart Disease / Cardiac Arrhythmias / Sudden Cardiac Arrest – What is it and what can you do about it?

Sudden Cardiac Arrest:  What is it? 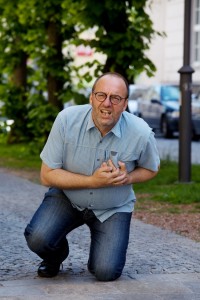 These symptoms could signal a heart attack or acute myocardial infarction (MI) and, if you experience any of these symptoms, you should seek immediate
medical attention. However, sudden cardiac arrest is not always due to a heart attack. So in this recent study, the investigators evaluated symptoms from population of patients during the weeks before their sudden cardiac arrest. They identified a list of frequent early warning signs and symptoms, which included:

This list is similar to the classic symptoms of a heart attack, but the investigators clearly found some unique differences. These symptoms are worrisome in people who have diabetes, high blood pressure, high blood cholesterol, obesity, or smoke. Additionally, these symptoms are especially worrisome in people with established heart disease (e.g. CAD or heart failure). These symptoms can also be different between men and women, which is a widely-known and appreciated phenomenon. In this recent study men tended to have more chest pain and women tended to have more shortness of breath, lightheadedness, and dizziness. The exact reason for this difference in symptoms between men and women is not known. This is why heart attacks are more often missed in women when compared to men, because their symptoms do not immediately suggest a heart problem initially.

Sudden Cardiac Arrest:  What should I do?

A sure sign that you need to head to the emergency room would be severe, sometimes referred to as “crushing,” chest pain in the center or left side of your chest and severe shortness of breath at rest or out of proportion to your activity – especially if these symptoms are accompanied by diaphoresis. Additionally, losing consciousness unexpectedly without warning (i.e. no gradual lightheadedness or feeling dizzy or feeling faint) or losing consciousness while exerting yourself (e.g. walking, climbing, running, playing sports, etc.) are very concerning. In these cases, taking 325 milligrams of aspirin orally and dialing 9-1-1 or contacting emergency medical services (EMS) would be highly recommended. According to this recent study, calling EMS had a survival advantage compared to not calling EMS. Most importantly, do not ignore your symptoms and do not drive yourself to the hospital! Ambulances, or at least family members or friends, can provide a safe way to get to the hospital without putting yourself or others in danger.

Dr. Guichard is a physician-scientist who is dual trained in clinical medicine and basic science research. He completed his training through a highly competitive and prestigious National Institutes of Health (NIH)-funded Medical Scientist Training Program (MSTP) earning both a M.D. and a Ph.D. in cardiovascular biology. He is nationally and internationally recognized for his contributions to clinical and basic science research in the fields of cardiovascular biology and metabolism, mitochondrial structure and function, aging, hypertension, heart disease, and heart failure.