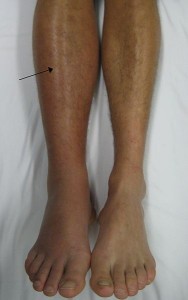 A leg DVT is a blood clot that forms in the veins of the leg. Symptoms of blood clot in leg occur because the blood clot blocks the blood flow in the vein in which it forms. Usually blood flows through the veins on its way back to the heart. When there is a clot, the blood can’t get past the clot on its way back to the heart and so there is a backlog of blood and congestion in the leg that leads to swelling. When clinically examining a patient we look for a calf that has become a few cm bigger than the other calf when measured around it.

As we stated before, the blood clot that forms in the leg leads to a congestion of blood that can now no longer pass on its way back to the heart through the usual channels particularly if the deeper and larger veins are blocked. The congestion of blood and the swelling basically mean that the pressure in the veins is higher and that is exerted on the tissue compartments within the leg. This is why symptoms of blood clot in leg include leg pain and tenderness.

For the same reason that leg pain and tenderness are symptoms of blood clot in leg, cramping can occur. This is due to the higher than usual pressures caused in the compartments of the leg by the blockage caused by the blood clot.

The symptoms of blood clot in leg can of course occur at rest but are typically worse with movement. Many patients report an increase in leg pain, cramping and tenderness with movement such as extending the leg or walking. Some people describe it as a deep muscle ache.

The congestion caused by the blockage in the vein from a blood clot causes blood to back up not only in the deep veins of the leg, but also in the smaller surface veins that drain in to them. This can lead to prominence of veins on the surface of the leg.

Passing Out, Shortness of Breath and Chest Pain

Symptoms of Blood Clot in Leg – Who’s at Risk?

Blood Clot In Leg – Making a Diagnosis With an Ultrasound Scan 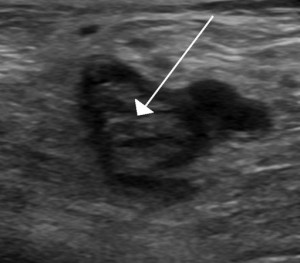 Blood clot seen on ultrasound in the femoral vein.

When there are symptoms of blood clot in leg, its important to make a diagnosis. Once the signs and symptoms are suggestive of a blood clot in the leg the test of choice is an ultrasound scan of the legs to look for the presence of clot.

Why It’s Important to Know