Uncontrolled hypertension and hypertension emergencies are a powerful risk factor for future cardiac and non-cardiac events. Hypertension affects almost 1/3 of adults and over 1 billion people globally. Hypertension prevalence increases with aging of the population affecting over 50% of people over 60-years old. The new guidelines identified ideal blood pressure, even among the adult and elderly population as lower, and define hypertension as all pressures > 130/80. As a result, almost 50% of American adults will be diagnosed with high blood pressure. The new guidelines established a clinical goal of the adequate treatment of hypertension in all adults, and shared responsibility for delivery of adequate care on both patients and healthcare professionals.

Uncontrolled hypertension and hypertensive emergencies can be categorized: 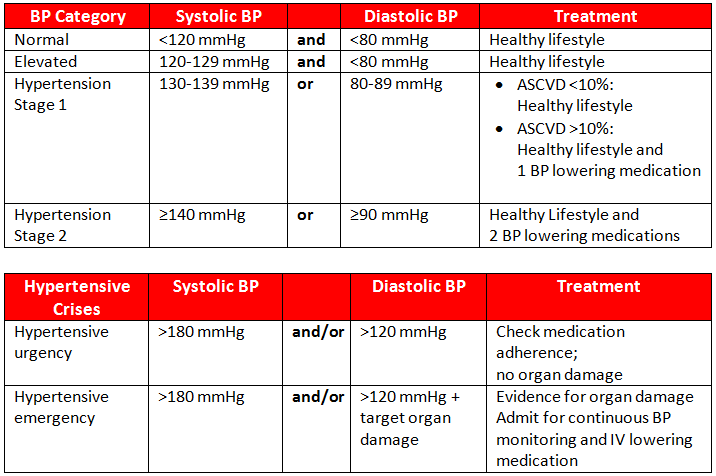 The calculation of the 10 year risk of heart disease and stroke (ASCVD) using a commonly available the risk calculator which includes the contribution of blood pressure, cholesterol, prior heart or vascular heart disease, diabetes and cigarette smoking.

Uncontrolled hypertension and hypertension emergencies are given emphasis because the higher pressures alone called for a risk to critical organs and failure to treat can result in permanent neurological, cardiovascular and renal damage.

Neurologic end-organ damage can present as hypertensive encephalopathy or intracranial bleed and can manifest as a stroke, loss of consciousness, confusion, seizures, memory loss or visual disturbances. An examination of the eye can show retinal hemorrhage, exudates or papilledema (arrows) as shown below.

Cardiovascular end-organ damage can manifest as back pain in the case of aortic dissection, acute coronary syndrome or myocardial infarction. Acute heart failure usually presents with severe shortness of breath, rales on physical exam and pulmonary edema on the chest x-ray. This can be accompanied by a loss of kidney function in the laboratory testing. Dr. Ahmed found that patients with uncontrolled hypertension have any increased incidence of heart failure if the systolic pressure is greater than 160,  are older or have hypertrophy (LVH) (below is an MRI displaying severe LVH). Patients with chronic kidney disease and systolic blood pressure greater than 140 had an increased risk of mortality and morbidity.

Uncontrolled hypertensive treatment can be tailored to each patient according to the presence or absence of end organ dysfunction. Some patients with blood pressure > 200/120 can present with symptoms of heart failure and will require immediate IV antihypertensive therapy and observation in the ICU. Sodium nitroprusside can be used and the blood pressure response can be titrated from minute to minute. Esmolol, or labetalol, can also be administered IV and have proven beneficial particularly in patients with aortic dissection and end-stage renal disease.

In contrast, patients presenting with acutely elevated blood pressure (>200/120) without symptoms, and in whom the blood pressure remained significantly elevated at discharge, should be started on medical therapy and follow up closely as an outpatient.

The initial treatment for hypertension should consist of a single drug or combination of 2 drugs (depending on the severity of HTN) from 3 major drug groups. These groups consist of “A, C or D” where A= Ace inhibitors or angiotensin receptor blockers (ARB’s), C= calcium antagonist and D= diuretic, thiazide type. As a rule, blood pressure can be controlled in the majority of hypertensive patients with lifestyle changes and drug therapy with 1 drug in 1/3 of the patients, 2 drugs in 1/3 of the patients and 3 drugs in the final 1/3. Having said that, epidemiological studies have found that control of blood pressures to <140/90 was reported only in 30-50 percent of the patients.

Some patient’s blood pressures remained uncontrolled despite 3 or more medications. These patients have “resistant hypertension” and are at increased risk of cardiovascular and reno-vascular disease. The characteristics of these patients include elderly (>75 yrs), obesity particularly in women and excess dietary sodium. They tend to have concomitant disease including left ventricular hypertrophy, chronic kidney disease, diabetes, and atherosclerotic disease including stiffening of the large blood vessels such as the aorta. Recent studies have shown that predominantly systolic hypertension does not respond well to therapy like renal denervation, and suggest that structural factors are predominant.

The burden of hypertension is considerable, particularly with the large number of patients that cannot be regulated with medical therapies. Lowering blood pressure in average of 10/5 mmHg lowers the risk of stroke by 30-40% and coronary artery disease by 25%. Doubling the reduction of blood pressure can result in a twofold increase in the benefits. New innovative approaches such as the ROX coupler creation of an anastomosis are particularly relevant to patients with uncontrolled, resistant hypertension. 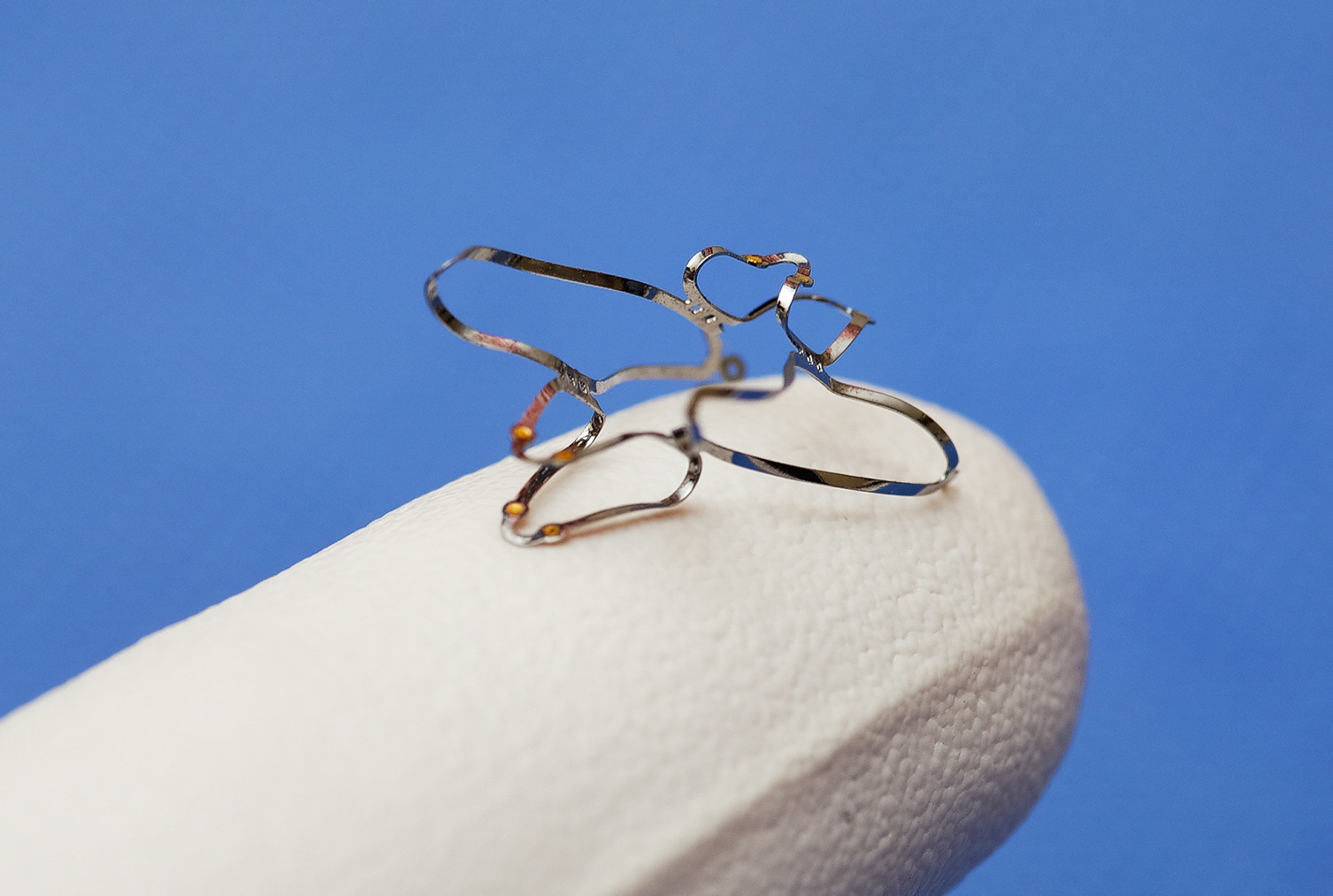 How is the AV anastomosis created using the ROX coupler?

2-     needle and wire advanced from the vein to the artery

4-     Retracting the venous portion and balloon to size

How does the AV anastomosis lower the blood pressure?

Routing a small amount of arterial blood into the venous system results in an immediate reduction of blood pressure in all patients by reducing aortic strain and heart’s afterload. This is a mechanical reduction of pressure and is unrelated to the prior use of medications.

The resulting increase in venous pressure increases the filling pressures in the right cardiac chambers and can attenuate the baro-receptor reflex which prevents increases in heart rate as blood pressure falls and limit the sympathetic activation. Also it can result in the hormonal release of peptides that have diuretic and vaso-dilatory affects.  These mechanisms are probably involved in sustaining the lowering of the blood pressure long-term.

How does the AV-anastomosis from the ROX coupler differ from an AV fistula?

The ROX coupler AV-anastomosis is a fixed conduit between the external iliac artery and the vein, and shunts arterial blood into the venous system at a rate of approximately 1 liter per minute. The lowering of the blood pressure is sustained without a rise in heart rate. Local complications such as iliac vein stenosis can present in approximately 30% of patients. Either the loss of the blood pressure benefit or a development of mild thigh edema suggests that this complication has developed. The venous stenosis is treated with local stenting.

The AV fistula created to provide venous access for dialysis patients is an end-to-side anastomosis between the brachial /radial artery with the basilic /cephalic vein. It provides a variable, uncalibrated flow which actually increases over time and can become deleterious, causing an increase in cardiac output, LVH and heart failure.

Preliminary studies with the ROX coupler:

Early testing of the ROX coupler AV-anastomosis device was performed in patients with COPD in an attempt to increase oxygen delivery. While no effects were noted on the level of oxygen in the blood, some patients experienced an improvement in exercise capacity. Hemodynamic studies revealed a decrease in systemic and pulmonary vascular resistance and an  increase in cardiac output and O2 delivery. Moreover, patients with uncontrolled hypertension had a significant drop in both systolic and diastolic blood pressure from a mean of 145/86 to 132/67 at 12 months. The vasodilator effect was greater in patients with more severe baseline blood pressure elevation.

The ROX CONTROL-HTN was a prospective, open-label, multi-center trial in patients with resistant hypertension (>140/90) on a stable regimen of more than 3 hypertensive medications. 83 patients were randomized with 44 assigned to the ROX coupler and 39 continued on medical therapy. After 6 months, a significant reduction in ambulatory systolic blood pressure was seen in the ROX patients with -13.5 +/-18mmHg compared to 0.5+/- 15 mmHg in controls. The 12 month follow up was also encouraging with ambulatory blood pressure reduction being sustained at 15.3 mmHg for the ROX group. Significant diastolic blood pressure reduction was also seen at 12 months pointing to the hemodynamic effects of the AV anastomosis. Particularly interesting was a group similar to our first patient who had failed to respond to renal denervation. Nine patients underwent ROX procedure and had ambulatory blood pressure reduction of 12/14 mmHg at 1 year.

This is a prospective, randomized, adaptive, double-blind, Sham control, multi-center study to evaluate the ROX coupler in patients with uncontrolled, resistant hypertension. To qualify, systolic blood pressure should be greater than 160 mmHg, or 150 mmHg if a hospitalization was required in the last 12 months. The patients should be on a stable medical regimen that includes a diuretic and 2 additional antihypertensive medications. This clinical trial started in October 2017 at BBH Princeton. We enrolled the 1st patient in the US and have so far randomized 5 patients. Dr Farrell Mendelsohn at Cardiology PC  is the principal investigator and HTN interventionalist at BBH Princeton. The study aims at enrolling a total of 250 patients and for more information, visit clinicaltrials.gov.

If you like the information in this article, make sure you read: “Treatment of HTN; when medicines don’t work”.

We would like to acknowledge the expertise of Jay Roberson at VitalEngine and Doctor Paul Sobotka for reviewing the article.