Home / Weight Loss – What Should I Eat For Breakfast? 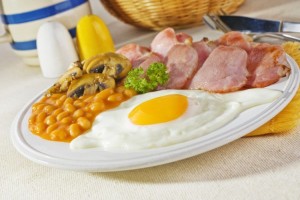 One of the most commonly asked questions I get regarding weight loss is “what should I eat for breakfast?” There are many different ideas, misconceptions and somewhat plain untruths out there about breakfast.  You’ve probably heard it being referred to as ‘the most important meal of the day’ or been told that a big breakfast will speed up your metabolism and help you burn extra calories during the day.  You’ve likely heard that you need energy from breakfast as you’ve been starving all night and will be unable to function properly without it.  The fact is that these ideas are often little more than assumptions derived from what people think happens rather than on any actual evidence.  This leads to people consuming wrong and unnecessary foods even when they may not want to eat.

So What Should I Eat For Breakfast?

To begin let me tackle the suggestion that we need breakfast to replenish our energy stores that we have depleted overnight.  Let’s say that you eat dinner at 7pm the night before.  This may take a few hours to digest and then a little while longer floating around your blood stream until the body stores it away.  So your overnight fasting period doesn’t even begin until about midnight.  So what happens after that?  Well when you are sleeping the body realises that it only requires a small steady supply of energy as it is not being exerted and switches to burning mainly fat instead of using carbohydrate.

There are endless supplies of fat in the body, even in people who look like they have none, so we don’t have to worry about fat stores running low.  So by the morning, although we have used some of our carbohydrate stores overnight, they are by no means depleted and there is no rush to replenish them.  Speak to any athlete and you will find that they can wake up and do a one-hour run on an empty stomach before feeling the need to eat anything.

So what about the need to wake up in the morning and eat breakfast to kick-start the metabolism?  Well there is no real merit to this idea either.  When you wake up the body is quite happy to kick-start its own metabolism without the help of a bowl of cereal.  Your metabolism doesn’t really slow overnight, it just goes back to its base, and as soon as you become active in the morning so does it.  The metabolism only really slows down in times of starvation as a protection mechanism but this happens over days to weeks, not hours.

So by now you may be thinking I am suggesting that you miss breakfast altogether.  Well no, I just want you to be aware that there is no reason that you MUST have breakfast whilst trying to lose weight.  There are many good points to breakfast as well, for example it can increase satiety (feeling of fullness) so you don’t feel the need for biscuits with your mid-morning cup of tea, and it can be something to look forward to, helping you cope with those late night cravings.

Try just having a cup of tea or coffee and a piece of fruit in the mornings.  To begin with you might struggle but after a few days you’ll find that as long as you keep yourself occupied in-between, you can make it to lunch just fine.  The main exception to this would be if you were doing some exercise in the mornings (more than just a walk) as then some breakfast would be helpful in replacing used stores.

So this leads onto the question, what should I eat for breakfast?  Well the answer seems obvious, breakfast cereal.  Sadly this is possibly one of the worst options if you are trying to lose weight.  Although it is marketed as a healthy start to the day, if you read the nutritional information you will find it contains mostly sugars and carbohydrates and is in no way a balanced and nutritious meal.  If you have read my earlier post on what’s in our food, you are probably asking yourself where is the protein, and you would be right to do so.  Yes there is some in the milk but not enough to balance the proportions.

An important belief to undo in your education into diet and nutrition is the notion that breakfast should consist of cereal.  If you think about it there is no special reason why breakfast should be any different to the other meals in the day.  It is not as if the body needs different fuel and supplies in the morning as compared to later on in the day.  Once you move past this idea that has been taught to you, without any basis I may add, since childhood you open up a vast array of options for a healthy satisfying breakfast.

When losing weight a breakfast should consist of a good portion of protein, some carbohydrate and a little fat.  The protein is of vital importance in making you feel full for longer and should be gained from sources such as lean meat (yes meat for breakfast), fish, eggs (limit the yolk to one) and other natural non-processed high protein foods.  The carbohydrate should be obtained from vegetables (fresh or frozen) and one or two portions of fruit.

We have become so used to high carbohydrate foods such as bread and cereal that we sometimes think of vegetables as empty foods that can’t provide us with the energy that we need.  This is simply not true.  Vegetables contain good carbohydrate and should form the basis of this macronutrient intake.  One of the beauties of vegetables is that they fill you up for very few calories, which is important in appetite control, but I will discuss this in another article.

I know a lot of this may seem a little far-fetched, especially if you are hearing it for the first time, but that is only because it goes against what you have been told for so long.  Trust me, if you’re not hungry then try skipping breakfast and see how you feel.  Don’t force any food down for the sake of it, as the body is very good at letting us know when it wants something.  If you are hungry then now you know the answer to the question “what should I eat for breakfast?”.  You’ll be surprised at how full and satisfied you feel after only a small amount, and you’ll also see the weight drop off as well.  What more could you want?