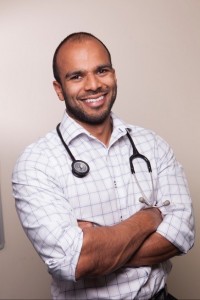 Dr. Murtaza Ahmed is originally from Nottingham, England, and attended the prestigious Nottingham High School from 1991-2002. Upon graduating amongst the top 1% nationally, he was admitted to the University of Nottingham, one of the nation’s oldest and most prestigious universities, to study Medicine. Whilst undertaking his training, he also involved himself in research and gained his Bachelors of Medical Sciences (BMedSci) degree before graduating from Medicine in 2007. He completed his internship at the Queen’s Medical Centre in Nottingham, the largest teaching hospital in Europe, before moving to Australia.

A keen interest in internal medicine resulted in Dr. Ahmed being admitted to the Royal College of Physicians in 2010, and he was awarded the much-coveted title of MRCP (London). He then chose to specialize in Sports and Exercise Medicine and gained his Masters in Sports and Exercise Medicine (MSc) from the University of Nottingham in 2011. After initially training in Emergency Medicine, he is currently working as a general practitioner in Australia, providing advice on exercise and nutrition on a daily basis in the context of sports, general health and chronic disease.

Dr. Ahmed comes from a strong sporting background and was involved in competitive soccer, rugby, cricket and athletics from a young age. At age 16, he became involved in weightlifting and powerlifting and through this learnt a great deal about the capabilities and functioning of the human body. He has also been involved in endurance racing, completing the world-renowned Ironman Triathlon (3.8km swim, 180km bike and 42.2km run) in Port Macquarie, Australia. He currently trains and educates those around him and aims to convey his knowledge and expertise to a wider audience to ensure many more people can reach their full potential.