What is Lactic Acid?

Lactic acid is an Alpha Hyrdoxy Acid (a type of carboxylic acid) with the chemical formula C3H6O3. As with all acids, lactic acid can give up a proton (Hydrogen ion H+) when in solution to form its conjugate base, lactate. 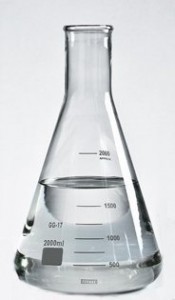 Lactic acid was first isolated in 1780 by renowned chemist Carl Wilhelm Scheele (About milk and its acid). He discovered it in sour milk samples, hence the name ‘lactic’. The samples he claimed contained the acid were impure and as such its existence was not widely accepted. By 1810 the

presence of lactic acid in other sources such as fresh milk and blood was confirmed and by 1833 it had been isolated and the chemical formula had been determined.

As with many compounds, Lactic acid was found to exist in both L and D optical isomers, and it is the L-isomer that is the one that has biological activity.

As mentioned, lactic acid is not only found in milk, but in various cells in many different organisms, and has also become famous, although for incorrect reasons, in exercise and muscle physiology. Lactic acid also has huge commercial applications in the food, medical and even construction industry, and has been produced commercially, be it in increasing amounts, since the late 1800s.