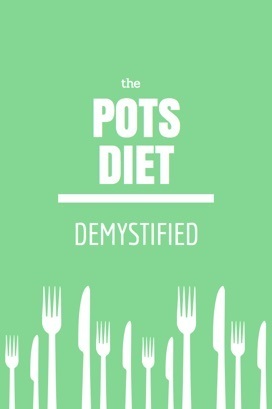 Diet is seen as a key component of any dysautonomia or POTS syndrome treatment plan. There are many sources available on the Internet and in journals that make dietary recommendations for POTS patients that may result in improvement in symptoms. In this article, we will look at some of these recommendations, and talk a little about whether they are backed up by research and whether they really work in improving POTS symptoms. Several links to appropriate POTS syndrome diet resources are also provided.

One of the biggest problems in POTS is the inability to tolerate standing, due to blood pressure dropping and heart rate increasing. Part of the typical initial POTS treatment strategy is increasing water intake.

Water intake has been shown to help healthy people tolerate standing for longer, and be less likely to faint in response to prolonged standing (Lu et al).  Water intake has also been shown to be beneficial in patients with orthostatic syndromes (Shannon et al). Most these studies examine the effect of drinking about ½ a liter of water over a five-minute period. Effects include improvement in standing blood pressure and reduction in standing heart rate, in addition to improvement in symptoms. In POTS patients, the fluid intake doesn’t have to be water to be effective. Soup was also shown to result in improvement of the blood pressure response and also in symptoms (Z’Graggen et al). This suggests that as long as hydration is maintained, it doesn’t matter too much what the fluid is.

A study done in 1999 looked in to one of the ways this actually worked (Jordan et al). It was found that it stimulated the sympathetic nervous system and raised the level of the stimulatory neurotransmitter norepinephrine, helping to maintain blood pressure.

Its important to maintain adequate hydration in POTS syndrome. There is a general recommendation to have >2 liters per day, or to maintain clear urine and this seems reasonable. At times where there are prominent symptoms of dizziness on standing, there is some evidence that drinking about 2 glasses of water over a few minute period may relieve symptoms in some patients.

There is typically a recommendation to increase salt intake in POTS syndrome, even to increase sodium intake to 5-10g/day for very symptomatic patients. Others would generally advise that salt intake is increased by 2-4g/day. There are dietary ways to do this, and if salt can’t be increased adequately through diet then salt tablets may be used if advised by a doctor. Salt should of course be avoided in those with kidney disease or heart failure.

Usually this is added to meals to achieve increased intake. One tablespoon of salt contains between 2 – 2.5g of sodium. When salt tablets are used, they may cause symptoms such as nausea and coated tablets may therefore be preferred. Salt supplementation is most likely helpful if combined with a gradual exercise program (Fu et al).

But why do we want to increase salt in the first place? The reason is that the amount of sodium in the body is directly related to the amount of circulating volume. So basically more sodium would mean more volume, which would mean better tolerance of orthostasis and less symptoms. There is some evidence that in adults with orthostatic symptoms, salt supplementation may decrease symptoms (El-sayed et al). There are no specific studies in POTS looking at this, however most would still recommend at least an effort to somewhat increase dietary salt. Its important to note that salt supplementation will not help in the hyper-adrenergic form of POTS. Ongoing studies are looking at whether a high dietary sodium level results in improvement of symptoms and signs in POTS patients (trial link).

Most experts would recommend that there be some effort to increase dietary salt in POTS patients by around 2-4g/day.  Particularly symptomatic patients may benefit from as much as 6-8g sodium/day if recommended by a doctor. Initial efforts should be made through dietary salt, and if necessary salt tablet may be used if part of a treatment plan.

This is a link to a useful resource for a diet higher in sodium: http://www.potsrecovery.com/p/lotsa-salt-diet.html

POTS patients are generally advised to eat smaller meals more often rather than larger meals, and also to limit the carbohydrate in their diet.

It’s reasonable to suggest that POTS patients, try eating smaller meals more frequently rather than a few large meals a day. It’s also recommended that carbohydrate content of meals is limited, particularly in patients that experience symptoms after eating.

The Effect of Caffeine

No study has closely looked at the effect of caffeine in POTS patients, however we can look at other studies to help us with this.

In some patients with orthostasis caffeine may actually be helpful to some in preventing the blood pressure dropping too low when standing (Dewey et al). But, other studies have suggested that intake of caffeine may actually impair the normal responses to prolonged standing, resulting in a lower blood pressure (Berry et al). In the subset of POTS known as hyperadrenergic POTS, levels of natural stimulants (known as catecholamines) in the body are high and caffeine, being a form of stimulant can possibly worsen the situation.

In terms of drinking coffee, there is no good evidence that it is helpful for POTS. Although there is no strong evidence that is it harmful, certain individuals may be sensitive to caffeine and so it’s probably worth avoiding caffeine to see if symptoms improve. Those with hyperadrenergic POTS should certainly avoid caffeine. Over the counter caffeine supplements should be avoided unless part of a treatment plan discussed with a doctor familiar with POTS.

POTS patients are typically advised to stop drinking alcohol, or strongly limit its intake. Lets take a look at the evidence underlying this recommendation.

Alcohol use has been related to passing out spells even in healthy young adults (Dermksian G et al.). Alcohol use is also associated with impairment of the body’s usual response to regulating blood pressure when standing. A nicely done study (Narkiewicz et al.) showed that this is because alcohol use prevents blood vessels tightening as usual, stopping the return of the blood to the upper body and the head. This may lead to low blood pressure, dizziness and possibly passing out. Often the muscles, especially in the lower body, tighten in an effort to increase blood flow return to the heart in response to a lower blood pressure. There is also evidence that alcohol use blunts this muscle response (Carter et al) which may also explain the worsening of orthostatic symptoms with alcohol use.

Alcohol is a strong diuretic (Roberts). Basically meaning it causes the kidneys to pee out more water leading to dehydration. This is a lot of what leads to the hangover effect. When it comes to POTS syndrome, diuretics and dehydration are avoided at all costs. In fact increased fluid intake is typically recommended. So it would seem crazy to stress an already fragile system with alcohol!

In view of the above, its very reasonable to advise avoidance of alcohol in patients with postural orthostatic tachycardia.

Energy drinks such as Red Bull have been implicated in development of POTS in young people. In one published report, avoidance of the energy drink resulted in complete treatment of the POTS syndrome (Terlizzi et al).

Energy drinks typically contain Caffeine and Guarana. Caffeine may exacerbate POTS symptoms in some patients. This is discussed in more detail in the section on caffeine below. Guarana is also a stimulant and contains twice the caffeine found in coffee beans.

Between 2004 and 2006, there were over 40 reported cases of adverse reactions from energy drinks in the USA alone and energy drinks are seen as a growing problem (Reissig et al). Symptoms reported included many of those seen in POTS such as tachycardia, tremors, dizziness and chest pain. There have been associations with seizures and even death (Clauson et al).

Energy drinks are certainly not beneficial for POTS syndrome, and there is potential for deterioration of symptoms. It is reasonable to recommend avoidance of energy drinks in POTS patients.

Allergies and Intolerances – Gluten and Dairy

Depending on the symptoms experienced certain conditions are worth considering in patients with POTS syndrome and may worsen symptoms if left untreated.

In patients with predominant gastrointestinal symptoms, celiac disease and gluten sensitivity may be considered. In some patients with these symptoms it may be worthwhile discussing a blood test with their doctor and also a trial of a gluten free diet to see if symptoms improve.

In patients with POTS and gastrointestinal symptoms, it is worth talking to your doctor and considering gluten or lactose intolerance, as treatment may certainly result in improvement of some symptoms.