POTS (Postural Orthostatic Tachycardia Syndrome) is associated with a multitude of symptoms with the hallmark being a significant rise in heart rate when standing, typically associated with symptoms of dizziness or even passing out. Treatment of POTS syndrome is often complex however part of the typical initial strategy that is felt to be effective to some degree in most people is increasing water intake. In this article we examine whether this is true, and we review the evidence behind this recommendation. 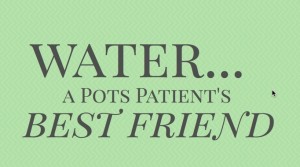 A study in 2003 looked at 22 healthy people. The participants did not have POTS syndrome. They wanted to see whether drinking water could improve a healthy persons ability to stand straight for long periods of time. The participants underwent the most common diagnostic test for POTS Syndrome – a tilt table test – where basically they stood dead still for a prolonged period of time. Half the participants drank 16oz of water a few minutes before the test, the other did not. It was found that the participants that did not drink the water were much more likely to almost faint. It was also found that water drinking prevented as much increase in heart rate, and also that it made the circulatory system more effective. Those that drank the water were found to tolerate the test for 36% longer. These findings have been confirmed in other studies.

POTS syndrome is a form of dysautonomia where the body cannot regulate the usual response that maintains blood pressure when standing from a sitting position. A study in 2002 looked at the effect of drinking water in patients with severe orthostatic syndromes. Patients drank ½ a liter of tap water in less than 5 minutes. It was found that in patients with autonomic failure (severe intolerance) that the blood pressure increased from an average of 83mmHg systolic to 114mmHg. It was also found that in POTS syndrome patients that water drinking reduced the heart rate response to standing from 123 beats/minute to 108 beats per minute. This was evidence therefore that in POTS syndrome water drinking may be an effective part of a treatment plan.

A European study done in 2010 looked at whether there was a difference in water intake versus soup intake as the fluid strategy of choice in orthostatic syndromes such as POTS syndrome. It was found that in the severe multisystem dysautonomias, clear soup could was not as effective as water in maintaining the blood pressure. In fact symptoms worsened in some. In POTS syndrome however, both water and soup resulted in improvement of the blood pressure response and also in symptoms.

Why Does Drinking Water Help?

Many studies have shown that acute water ingestion can improve symptoms and the blood pressure response to standing in patients with autonomic dysfunctions such as POTS syndrome. A study done in 1999 looked in to one of the ways this actually worked. It was found that it stimulated the sympathetic nervous system and raised the level of the neurotransmitter norepinephrine, much in the same way that caffeine or nicotine does. Interestingly a study from China done in 2014 demonstrated that in children and adolescents, those drinking less than 800ml/day were almost 4 times more likely to suffer from POTS syndrome.