Home / Heart Disease / Coronary Artery Disease / Did That Stent Save My Life?

Pretty much everyone knows someone who has had a stent placed in his or her heart. The story told by the patient with the stents is classic. The chest pains had been coming and going for a while, but they had been passed off as indigestion or muscle pain. Tests were done, and showed that in fact these symptoms were due to a blockage in one of the main arteries supplying the heart! They were lucky to have made it this far, but luckily the cardiologist was on hand to save their life in the nick of time by performing an emergency stent procedure to open up the blocked artery, without which they would probably not be alive today! But is this true or is it a large misconception about the true effectiveness of stents?

At myheart.net we’ve helped millions of people through our articles and answers. Now our authors are keeping readers up to date with essential information through twitter. Follow Dr Ahmed on Twitter @MustafaAhmedMD

It’s not hard to see why people would naturally think that the stent saved their life, in fact just put yourself in that position. You begin to have some symptoms of chest pressure when doing things, and notice that you are getting tired more easily. Your parents both died from heart disease, and you of course are very worried that your heart may be the cause of your symptoms. You go to see your doctor who orders a stress test. The results show that the test is positive and you probably have a blockage in one of your heart arteries.  You find yourself lying on a table having an angiogram, a procedure done well over a million times a year in the US that involves injecting a small amount of dye in to your heart arteries to see directly if there are any blockages. While you are still lying on the table, the cardiologist tells you that they have found a 70% blockage in one of the main arteries that supplies your heart, and this is the cause of the symptoms. Of course, this is a scary prospect, and you feel vulnerable given that a problem has been found with your heart.

There are two main options at this point. The first option is called ‘optimal medical therapy’, remember this term, its important (see table 1). This involves taking a number of medicines that are proven to improve survival and symptoms in people with coronary artery disease (read ‘Should I Take An Aspirin Every Day?’), paying close attention to lifestyle factors such as weight and diet, and ‘modifying risk factors’ such as stopping smoking and ensuring co-existing conditions such as diabetes are managed in the best way possible. The other option is that in addition to this ‘optimal medical therapy’ a small tube called a stent can be inserted into the artery through a tiny hole in your groin. This stent is placed in the area of the blockage, opening it back up again, and making the 70% blockage a 0% blockage to allow the blood to flow normally through the artery again. Of course stents appear to be an attractive option. After all, it’s a scary prospect to be sent back home with a 70% blockage still there and just medicines to treat it. It is not just a scary prospect for the patient, but also the cardiologist, as naturally an artery always appears to be more pleasing to the eye and the brain, with a 0% blockage rather than a 70% blockage! But this is where it gets interesting.

The goal of treatment of coronary artery disease is to make the patient live longer, be safer, and feel better. Although the stent provides immediate visual satisfaction by getting rid of the blockage, does it achieve these goals? What if even though there is a 70% blockage, putting in a stent did not make people live any longer, did not reduce the chance of having another heart attack and did not reduce symptoms in the long term? And on top of all that, putting a stent in can expose the patient to additional risks, including that of the procedure itself and the chance that the stent could later block off, which would cause a heart attack. This is why it’s not as simple as just saying let’s put in a stent, as before this can be recommended we need proof it’s in the best interests of the patient. Physicians pride themselves on following something called ‘evidence based medicine’. This is the cornerstone of modern day clinical medicine and basically means that whenever possible, the recommendations made to patients are not just made up based on what we think, but rather formed as the result of well-designed clinical trials that have shown that those treatments have a proven benefit.

So when do stents save lives? We know for a fact, based on the findings of numerous studies that in emergency situations, for example, when someone is having or has recently had a heart attack, unstable symptoms, or a major blockage in a critical area, the use of a stent or even open-heart surgery to open up a blocked artery is clearly the treatment of choice.  In these situations the stent may truly be lifesaving and improve quality of life by preserving the ability of the heart to beat normally.

But what about non ‘emergency’ situations, which are by far the more common situations, or what we call stable coronary heart disease.  An example might be 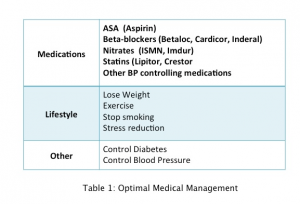 the patient who has symptoms such as chest pain when they push themselves that disappear with rest, and is found to have a blockage in one or more of their arteries that is causing those symptoms. For years we thought it was obvious, naturally one would think that placing a stent getting rid of the blockage, will both make the patient live longer, feel better and lower their risk of more problems. It was very surprising therefore when several well-designed, large, international trials demonstrated that when compared to the use of ‘optimal medical therapy’ the use of stents had no added benefit when it came to preventing death, heart attacks, the need to use further stents and most surprisingly it was often no better in relieving the angina symptoms.

These findings were reported widely in medical journals, and the media, and went against everything that everyone had thought up to that point. It turned out that in the case of stable heart disease, where although the blockage is the cause of the symptoms, it is not in an area considered immediately life threatening, it would appear that an initial strategy of using the correct medicines, careful management of co-existing conditions such as diabetes, and close attention to lifestyle changes such as diet, exercise and strict avoidance of smoking is preferable to placing a stent. Not only does this have the same impact as placing a stent on saving lives and improving quality of life, but it avoids the risks associated with placement of that stent. The beauty of this approach of course, is that in the case where it fails to work and the symptoms persist, a stent can always be placed at a later time if required. And the studies proved that doing this does not place the patient at any increased risk.

But how can it be that simply using medicines, lifestyle changes and treating other contributing conditions such as diabetes can be preferable to getting rid of the blockage with a stent in people with stable disease? There are a number of reasons for this. Coronary artery disease is a disease that affects pretty much all the arteries in the heart. It weakens the walls of the heart vessels and leaves

them prone to rupture and a heart attack. It turns out that even if you have a tight blockage in your arteries causing the symptoms, it’s often another area that bursts and causes a heart attack, an area that may have appeared normal previously! This is why it’s critical to treat the whole disease process and why simply putting a stent in a blockage may not reduce the risk of further problems. In addition to treating the disease process and preventing the disease from progressing, lifestyle changes and medications allow the heart to become more efficient and improve blood flow in the arteries. This may effectively treat the symptoms and prevent the need to place a stent, and therefore prevent the risks associated with stents.

Hundreds of thousands of stents are implanted each year to treat stable heart disease, and despite the fact that there is a wealth of evidence to support the use of medicines initially for the treatment of stable coronary disease, less than half of patients presenting with stable disease have a trial of appropriate medical therapy first, probably because practitioners continue to hope that the stents will be better. The problem is that when it comes to the decision to use stents first in this setting, there is no proven benefit, but there are definite harms.

The studies that looked at the use of stents in stable coronary disease are not perfect, however, and many questions remain, particularly for those stable patients considered to be at higher risk. In these higher risk patients the best course of action is not known at this time and it is this group that is the cause for most of the ongoing debate. In that group, although the blockage is not in an area considered to be immediately life threatening, the area supplied by the blocked artery is relatively large, often causing results for tests assessing this such as a stress test to be read as being in the range of moderate to severely positive. Some would argue, based upon the findings discussed above, that in this group medicine and lifestyle change should still be tried first. Others would argue that since the blockage is in an area of an artery supplying such a large territory of heart muscle that a stent should be placed straight away. Unfortunately there is no convincing evidence to guide us either way and therefore neither strategy can be labeled as being right or wrong. The good news is that ongoing trials and study should help to answer this question within the next few years.

Over a million stents are implanted in the US each year to treat heart disease, and many of these are truly done as lifesaving procedures. Many, however, are done in the setting of stable, non-critical coronary disease without an initial trial of ‘medical therapy’ despite the fact they there is a wealth of evidence to support the use of medicines and lifestyle changes as the initial treatment of choice. The truth is however, in the setting of stable, non-critical, non-high risk disease, stents do not save lives, do not reduce risk of bad events, and are often no better than medical therapy at helping symptoms.

If you liked this article and would like to read more on heart attacks and how they should be treated then have a look at our expert articles ‘Should I Take An Aspirin Every Day?’ and ‘The Widowmaker’.  Also read our article What is the Best Stent for Our Patients?