Although we identify only four chambers with a normal human heart, the left atrium has a small finger-like pouch attachment most commonly called the appendage. 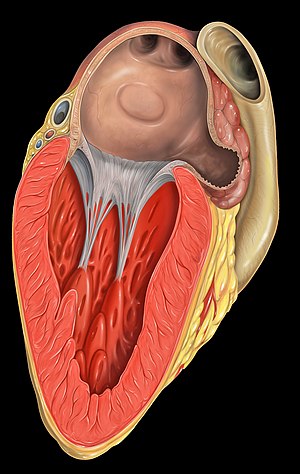 Blood flow within the appendage can be slower than the rest of the left atrium. Although many cardiologists would argue, the left atrial appendage does have value. It has been shown to help in the following ways:

Unfortunately, when a patient has atrial fibrillation, there is a major downside. Relatively slow blood flow now becomes stagnant blood. We all know that stagnant blood becomes clotted blood. Blood clots within the heart are dangerous not so much because of any particular harm done to the heart but because the danger that a liberated blood clot poses to the remainder of the body, particularly the brain.

Currently there are three blood thinners for higher risk atrial fibrillation. Each has pros and cons that will be discussed here briefly. You will need to have an honest discussion with your health care provider to decide which is right for you. 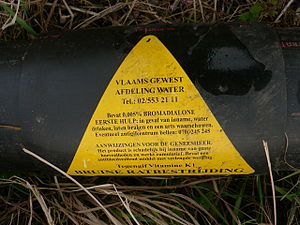 Warning label on a tube of rat poison laid on a dike of the Scheldt river in Steendorp, Belgium. The tube contains bromadiolone, a second-generation (“super-warfarin”) anticoagulant. (Photo credit: Wikipedia)

This medication is Old Faithful.  It started its illustrious career as a lowly rat poison but has reached heights that it never imagined. It is the blood thinner that patients are most curious about. Dosing is once daily, it has been available forever and we understand how to use it. Five decades of use have proven that this vitamin K antagonist reduces the risk of stroke in patients with atrial fibrillation. Unfortunately, warfarin is very finicky and can be difficult to find the correct dose for you. The target range of effect is very narrow which further makes dosing difficult. If you blood is too thick, you are not fully protected from stroke. If your blood is too thin, your risk of bleeding is higher. You will need frequent checks of your INR (a blood test to follow the blood’s thickness) to make sure that you are within range.Warning label on a tube of rat poison laid on a dike of the Scheldt river in Steendorp, Belgium. The tube contains bromadiolone, a second-generation (“super-warfarin”) anticoagulant. (Photo credit: Wikipedia)

When dosed properly, warfarin can be a powerful ally but in the case of warfarin life can get in the way. There is a list of medications as long as my arm that has a direct effect on warfarin’s potency. Most result in increasing its potency and potentially place you in danger from bleeding.  Many foods we eat, especially green leafy vegetables, decrease its effectiveness and place you at risk of developing clots. If you are going to be on warfarin, you must meticulously keep track of what you put in your body.

There are some really good things about warfarin that may make it appealing to you. Because it is a really old drug, it can be very inexpensive. If the costs of lab work are excluded it can be as low as pennies per day. The other really good thing about warfarin is that it is reversible.  The “antidote” is vitamin K, a substance commonly found in green leafy foods. Should you have an issue with bleeding while on warfarin, we can correct you blood levels without issuing plasma. 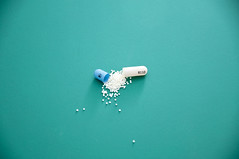 – This is an oral direct thrombin inhibitor that is not approved for atrial fibrillation associated with valvular heart disease. It was the first medication not named warfarin that the FDA gave the seal of approval for the anticoagulation of atrial fibrillation. Although dosing is twice daily, many patients find it more convenient than warfarin because there is no need to constantly follow-up with your health care provider for the pesky INR checks. There is also far fewer interaction with medications and food.

Rivaroxaban (Xarelto) and Apixaban (Eliquis) – These medications fall under the category of factor Xa inhibitors. They work at a different place in the clotting cascade than do Pradaxa but for your purposes, you can consider the thrombin inhibitors and Xa inhibitors as one in the same. Dosing is once daily in the case of Xarelto and twice daily for Eliquis.

As you might imagine, there are some downsides to direct thrombin and Xa inhibitors. Compared to warfarin, the medication can be quite expensive. For Pradaxa and Eliquis, dosing must be adjusted if you have kidney dysfunction. Failure to make the proper adjustments could result in too large a dose and bleeding complications. If you have severe kidney dysfunction, all three should probably be avoided. When bleeding does occur, it is not as easy to fix as with warfarin. The intervention for bleeding may be as simple as discontinuing the drug in most cases but can be as significant as short-term dialysis for rare cases.

I see all the law firm commercials on television about the risks of blood thinners. They are enough to frighten anyone. The decision to start anticoagulation because of a diagnosis of atrial fibrillation can be a difficult one. Talk with your doctor; it could save your life.

*These medicines do not actually thin your blood. They alter your clotting potential. Your blood viscosity of your blood remains the same 😉

Related Articles : Atrial Fibrillation – Part 1 – What is It?