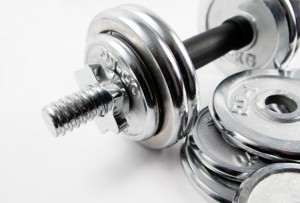 The Benefits Of Weight Training

In the previous post I talked about why you should exercise, but when it comes to exercise there are two major types, aerobic (‘cardio’) and resistance (weight).  These two forms of training are very different in their execution (although they can both provide an element of overlap) and are both EQUALLY important in overall health.  I stress this point because people are often mistaken in thinking that aerobic exercise is the most important type of exercise for health and fitness.  Another common misconception is that aerobic exercise should form the basis of an exercise program designed for weight loss; something I can assure you is not true.  Any fitness program, be it designed for weight loss or for general health, should contain both aerobic and resistance training.  There are just too many benefits of weight training for it to be ignored.

[Before I go on I should just say (for the benefit of those who already have some understanding in this field) that although I use the term aerobic to encompass all cardiovascular exercise, things are a lot more complicated than this and ‘cardio’ actually consists of both aerobic and anaerobic elements, but as these are still fundamentally different from resistance exercise so I will describe them as one in this piece.  We will go into the sub-groups in a future article.]

Most people know what is meant by the term ‘cardio’.  It basically describes all those exercises such as running, cycling, rowing, walking, football, basketball etc.  The important fact with ‘cardio’ is that it generally takes place over an elongated period (minutes to hours) and generally involves bodyweight (there are deviations such as cycling but although external resistance is added, this is needed to replace bodyweight which has been removed from the equation by the seat).  So what do we mean by and what are the benefits of weight training?

Weight training generally means carrying out a movement where the muscles are loaded and made to work against an external weight.  The most widely recognized example of this would be weight training in the gym.  It generally encompasses exercises where one or more joints are loaded with a weight in excess to what it is generally accustomed to handling.  This may require weight in addition to bodyweight such as the squat, weight alone such as the bench press, or in some cases some external assistance to reduce bodyweight (for example people first learning to do chin-ups).

So why do you need to do weight training?

Weight training actually targets a whole different system compared to aerobic exercise.  Although muscles look the same form the outside, they are actually made up of very different fibres.  One type of fibre (Type I or slow twitch) is built to provide a low level of force for a long time such as in aerobic exercise, whereas the other (Type II or fast twitch) is made to provide a high level of force for a short amount of time as needed during strength exercise.  So if you were to spend all of your time doing aerobic exercise, you would improve your type I muscle function, but your type II function would stay stagnant.  This would result in an imbalanced muscle and lead to imbalanced physical ability.  This is actually a very complex and fascinating area, which we explore further in the future.

Why should you care about Type IIs?

The fact is that strength fibers are incredibly important in everyday living.  They provide the power that lets you move quickly, pick things up, open doors, stand from sitting, run after someone and so much more.  These fibres are the fibres that make you strong when you are young and allow you to keep your independence when you are older.  This is actually a key point and the very reason why resistance exercise actually becomes more important as you age.  As you age your muscles slowly waste through a process known as sarcopenia.  This is a very important topic that I will go into more detail on in the future.  For now however you should now that this process begins in your 50s and can result in loss in independence one or two decades later.  You can help fight the effects of sarcopenia by carrying out resistance exercise earlier in life and ensure a better quality for the future.

Other benefits of weight training

There are numerous reasons why you should lift weights and I must stress at this point that I’m talking about males and females.

So I hope that you now understand that weight training is as important as aerobic exercise for health, fitness and physical appearance and the benefits of weight training are numerous.  When putting together an exercise program make sure you make sufficient time for each and you will reap the rewards, both now and in the future.  Next time you go into the gym, wander over to the weights section and try a few of the machines (they often have instructions on each one) and as you improve and gain in confidence move onto the free weights.  Whatever you do don’t be intimidated by the people you see in that section.  They once started in the same position as you and everyone has the same right to be using the gym’s equipment.  If you are new to weight training don’t worry about specific plans for the moment; I will go into these in time, but just try things out and get comfortable lifting weights.